Deprecated function: The each() function is deprecated. This message will be suppressed on further calls in _menu_load_objects() (line 579 of /home/ep4okvgb6sfn/domains/newbornfoundation.org/html/includes/menu.inc). 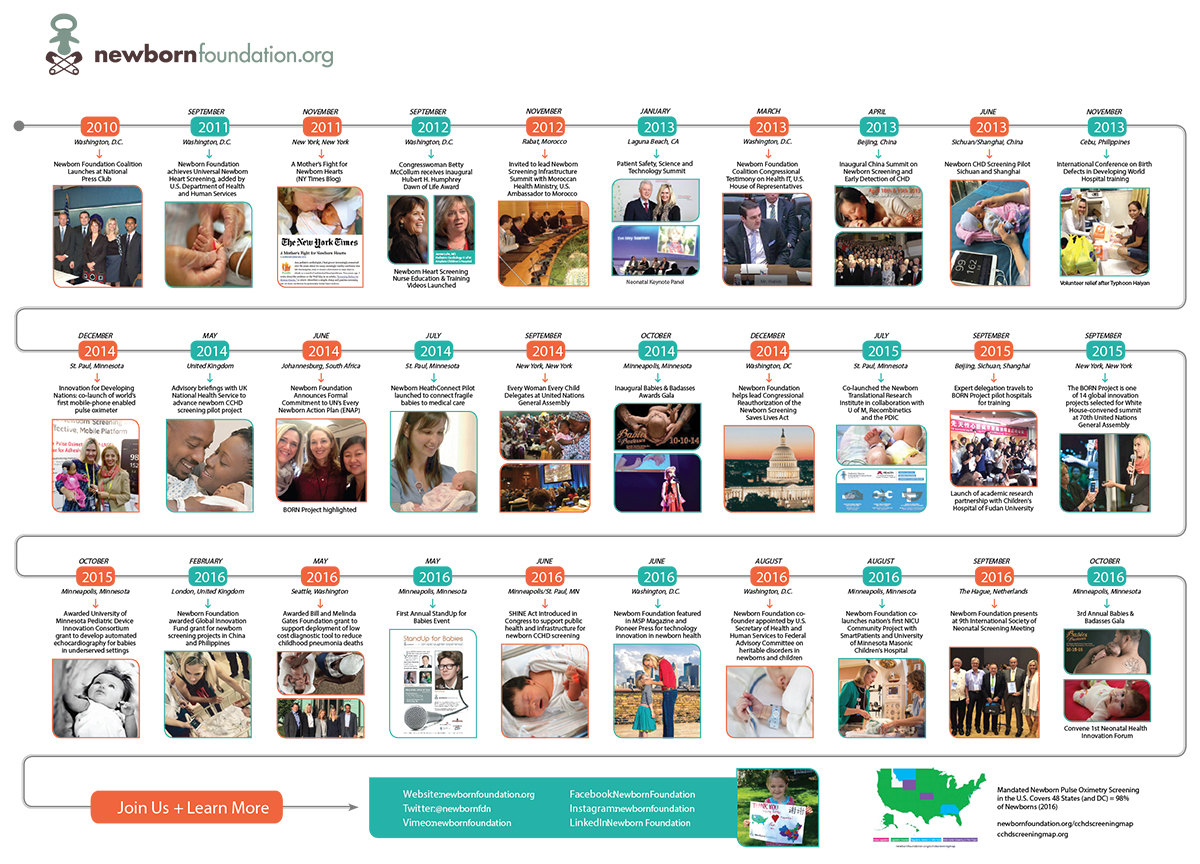 Among the first policy priorities was the addition of newborn screening for the most common and deadly of all birth defects, Critical Congenital Heart Disease (CCHD), to the U.S. Recommended Uniform Screening Panel (RUSP). In September 2011, the Newborn Coalition achieved its first policy priority with the Department of Health and Human Services formal recommendation that all 4 million U.S. annual births be screened using pulse oximetry. The first multi-center screening pilot conducted in collaboration with a state Department of Health was established, and the organization’s leadership provided the initial landscape for nomination and testimony to the Secretary’s Advisory Committee on Heritable Disorders in Newborns and Children, the federal advisory committee the reviews and recommends all conditions for which newborns should be screened. We went on to testify at four subsequent committee hearings in Washington DC, provide more than 75 briefings to congressional members and federal agencies, and helped spearhead and serve on the first federal Workgroup for CCHD Screening and Implementation.

Today, the Newborn Foundation | Coalition’s cchdscreeningmap.org reflects a massive leap from less than 1/3 of one percent of newborns being screened for heart defects and hypoxemia to nearly universal screening in 2014.   The Newborn Foundation | Coalition’s current initiatives cover domestic and international efforts, including pilot project follow-up to the inaugural China Summit on Newborn Screening and Early Detection of CHD, in collaboration with public health and governmental leadership, international NGOs, healthcare providers and researchers that touch the newborn health ecosystem. The organization has crafted legislation and statues, lobbied or provided testimony on newborn pulse oximetry screening and other neonatal health issues in more than 30 U.S. states and within more than a dozen international government agencies.

Between 2011 - 2014, with the Newborn Foundation | Coalition’s advocacy, an additional 3.2 million newborns have been screened for heart defects and other serious health conditions.

In the next 2 years alone, the BORN Project could help save more than 100,000 lives through protocol-based pulse oximetry screening and early detection of sepsis, pneumonia and hidden heart conditions in newborns.

By the end of 2014, international programs developed, supported or implemented by the Newborn Foundation were responsible for an additional 2 million babies being screened for hidden heart defects, sepsis, pneumonia and other serious conditions.

Since the BORN Project launched in 2013, it has impacted - 31 provinces, 70 front line clinicians, 50 maternal and child health facilities and nearly 400,000 newborns in China.

Stay in the Newborn Loop

You have the power to change everything. Step up, keep informed and help a newborn survive and thrive.

Newborn Foundation @newbornfdn February 6
RT @globalarchorg: We asked "About ____babies born with a heart defect will need surgery as infants to survive." 38.5% said 1 in 4, 0… https://t.co/5UQQPSkqSd
Newborn Foundation @newbornfdn December 25
Happy holidays and Merry Christmas to all our friends, partners and colleagues celebrating today. For every family… https://t.co/DPVxml9HFv